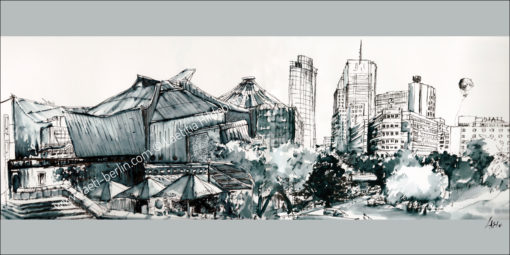 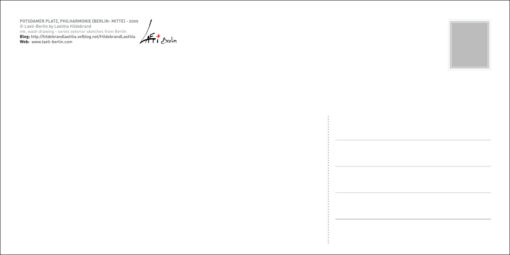 This postcard represents the place of Potsdamer Platz located right in the city centre of Berlin.

I drew this urban sketch on the 12th of November 2009 directly at the location in Berlin Mitte-Tiergarten. My point of view was from the museum complex Kulturforum in front of the orchestra hall Philharmonie.

I was sitting on the steps of the Kulturforum because from where I can have a beautiful overview of Potsdamer Platz. It was sunny and I needed around one hour.
This illustration is also on my blog “Traversée d’Encres” .

On the postcard Potsdamer Platz, we see the Phiharmonie on the left, after the Sony Center (like a circus tent), on the middle the business center (ex: DB and Atrium Tours) with some hotels (ex.: Hyatt) and the Debis Areal. On the right in the sky there is the hot air balloon of Die Welt (in German: The World. A famous newspaper), heldon a rope, where tourists watch the city. In the foreground, we can observe some parasols of the Kulturforum terrace. It is a museum complex with the famous Gemäldegalerie and the Kupferstichkabinett (Print room), characterized by its innovative modernist architecture (organic designs) of Hans Scharoun. The same architect built the Berliner Philharmonie from 1960-63. It is a concert hall in Berlin, acclaimed for both its acoustics (stage in the middle, like a circus) and its architecture.

Potsdamer Platz is an important public square and traffic intersection in the centre of Berlin, south of the Brandenburg Gate and the Reichstag (German Parliament Building), and close to the southeast corner of the Tiergarten park. It is named after the city of Potsdam, marks the point where the old road from Potsdam passed through the city wall of Berlin at the Potsdam Gate. After developing within the space of little over a century from an intersection of rural thoroughfares into the most bustling traffic intersection in Europe, it was totally laid waste during World War II and then left desolate during the Cold War era when the Berlin Wall bisected its former location. Since German reunification, Potsdamer Platz has been the site of major redevelopment projects like the Berlinale International Film Festival.

Do not hesitate to click here if you are interested in the big poster Potsdamer Platz Berlin!