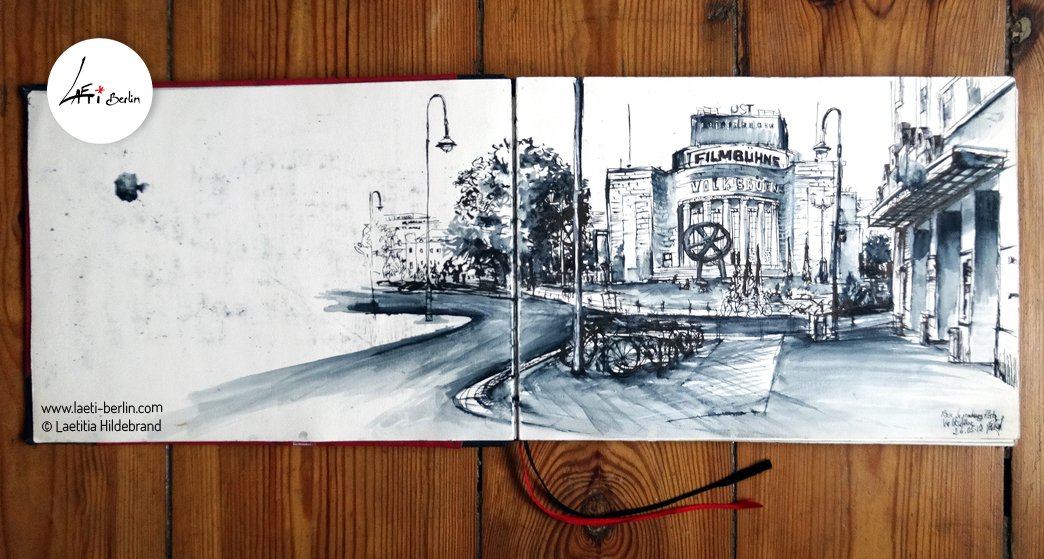 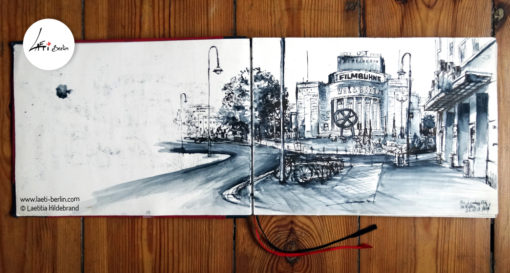 The Poster Volksbühne Berlin represents the theatre “Volksbühne”. It’s located at Rosa-Luxemburg-Platz (Rosa Luxemburg Square): map.
I drew this urban sketch on the 26th of May 2010 directly at the location in Berlin-Mitte.

As a technique I applied wash drawing (ink and water).
And the artistic tools that I used for this illustration are:

I was sitting front of the cinema “Kino Babylon” on a piece of wall, at the crossroads Hirtenstr. and Rosa-Luxemburg-Str. I needed one hour for this urban sketch but then it began to rain… so it seemed that I had to stop to draw.

On the left of the Poster Volksbühne Berlin, we see the theatre “Volksbühne” and on the right the cinema “Babylon”. We are at Rosa-Luxemburg-Platz. This place is dedicated to the Marxist theorist, socialist, communist and revolutionary German woman: Rosa Luxemburg.
The Volksbühne (“People’s Theatre”) was built during the years 1913 to 1914 and was designed by Oskar Kaufmann. Has its origin in an organization known as the “Freie Volksbühne” (“Free People’s Theater”) which sketched out the vision for a theater “of the people” in 1892. The original slogan inscribed on the edifice was “Die Kunst dem Volke” (“Art to the people”). Now it’s an interesting area with some concerts and contemporary theatre plays. More Infos here.
The owner changed in 2017 that’s why there is not anymore the sculpture.

The “Babylon” was constructed in 1928-29 by the architect Hans Poelzig. This cinema is used for the “Berlinale International Film Festival”, as well as musical and literary cultural events.

Be the first to review “Volksbühne – Poster A4” Cancel reply